When in Hong Kong the thing I miss most about England (apart from family and friends obviously!) is the food. It’s cheap, fresh and there is just so much variety. The health food scene in London is exploding right now and so when I had to go back to the UK I decided to add on a couple of extra days to sample all the restaurants I’ve been swooning over on Instagram.

Just being able to eat a meal without a squirming baby on my lap was amazing enough but when I looked at the menus I almost started clapping my hands with excitement!

Oh I do hope Hong Kong catches up with the UK. Imagine Grassroots Pantry (the number 1 plant based restaurant in Hong Kong). Now imagine there were restaurants like that ALL OVER HONG KONG. I was spoilt for choice but I could only eat so much food in a day! It was a tough choice but in the end I decided to go for 26 Grains, Farmacy, Redemption, Hemsley and Hemsley, and Wild Food Cafe. 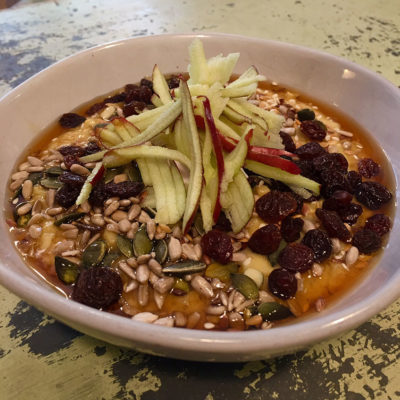 With the growing interest in gluten free and with bestselling books such as Grain Brain and Wheat Belly you’d be forgiven for thinking that a trendy new healthy eatery would be the last place to put grains on the menu. But this cute little cafe in beautiful Neals Yard ONLY has grains on the menu and has been a huge hit. However, these are not the grains usually associated with bloating and brain fog. The grains they use are all energy sustaining, free from refined sugar, organic and include oats, amaranth, quinoa, buckwheat, brown rice and millet.

Porridge has become a popular breakfast choice recently so is naturally their best seller. The restaurant is geared towards the breakfast market but they also have muesli, waffles and savoury bowls on the menu too. I got there at 9.58 and judging by how busy it was within the first 20 minutes of opening it’s not doing too bad! I went for the ‘Nordic Spice’, a porridge base with coconut milk, cardamom, cinnamon, ginger, turmeric, seeds, raisins, coconut yoghurt, apple and maple syrup. WOW. I could easily eat this for breakfast every single day. The spice was perfect. I was worried that it might taste a bit curry like with the turmeric but the other spices balanced it out and it was delicious.

The menu changes monthly depending on what’s in season. A lot of their fresh produce is sourced from local suppliers and their grains and dried ingredients are from the areas where they grow the best. For example, Turkish dates and the grains from UK and Europe due to the fact that grains tend to grow in wetter climates.

Alex Hely-Hutchinson is behind the concept. Spending time in Copenhagen, inspired by Scandinavian cooking and a successful kickstarter campaign has ensured her ‘pop up’ in Covent Garden has become permanent. Her much anticipated book is coming out on September 8th and I can’t wait for it to arrive 🙂

A new plant based restaurant in Notting Hill opened by Camilla Al Fayed. She says “Seeking a healthy and alternative lifestyle I was inspired to create Farmacy; a destination to share my philosophy that putting nutrition first does not compromise good food or good times” I couldn’t agree more and was so excited when this place opened just 1 minute from our front door! I knew this would become my new local when in London so obviously I had to go 3 times to get a good idea of the menu 😉 On my first visit I had the Caeser Salad which had a sunflower seed dressing and dehydrated mushrooms to replace the anchovies. I decided to try one of their O.M.G Syringe Shot with flaxseed oil, grapefruit and cannabis oil. It’s a bit of a gimmick but it makes a good photo for instagram! On my next visit I went for the Farmacy Burger made with mushrooms, millet and black beans served in a wholemeal bun with goji berry relish and potato wedges. This was a winner. Even better than the vege burger at Byron across the road which I didn’t think was possible!

Lastly a lovely lunch with an old friend where we tried to pack in 2 and a half years into 2 and a half hours! We both went for the Green Eggs Bowl – quinoa, kale, brocolli, garlic aioli, avocado and poached egg followed by (for me!) their Nice Cream Brownie Sundae. 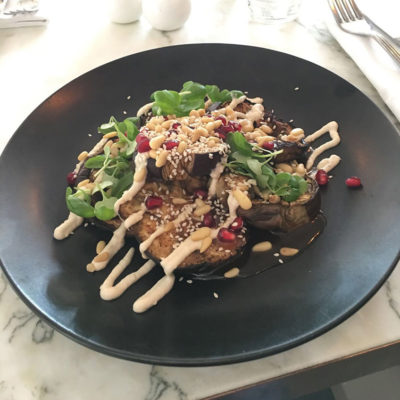 Located in Notting Hill and Shoreditch, Redemption’s motto is ‘Spoil yourself without spoiling yourself”. Owners Catherine and Andrea set out to create a buzzing bar where people could come and enjoy themselves without the hangover. They offer an interesting and diverse non alcoholic cocktail menu as well as a vegan menu. More and more bars are popping up that cater to teetotalers. Mocktails used to be a sickly sweet fruit juice or a boring lime and soda. Redemptions mocktail menu included berry infused martinis made with coconut water and apple mock-jito as well as alcohol free beer.

I was here to sample the menu though. I love aubergine so it was an easy choice. It was soooooooo good. Like, really really good. So good that I had to call the chef out of the kitchen and ask how she made it! The aubergine slices are glazed with a miso and soya sauce which they marinate in before going in the over to caramalise. The dressing is tahini and more of the delicious glaze topped with pine nuts, pomegranate and micro basil. It was one of the best things I’ve eaten. There were 6 other diners who couldn’t stop talking about how wonderful the sushi rolls and risotto were. Next time 🙂 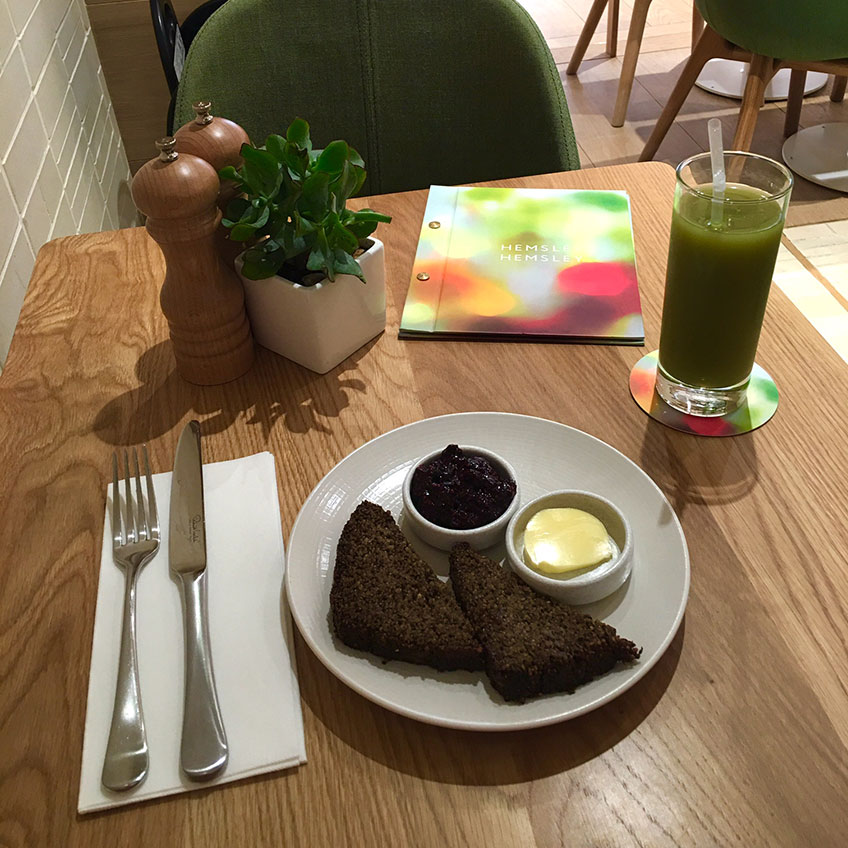 A bit disappointing due to the fact that I got there at 11 and the daytime menu didn’t start till 12. I ended up ordering the quinoa zucchini toast. There was a choice of 2  topping – grassfed butter and raw blueberry chia jam or avocado, feta and tomato.

The toast did not really go with the sweet option. I’m sure it would have been nice with the savoury option though. 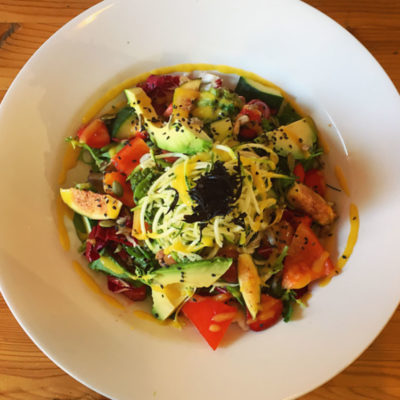 Located in the technicolor Neal’s Yard, this was the third time I’ve visited but the first time I’ve seen their summer menu. I went for the popular Ayuvedic Super Salad with lambs lettuce, wild rocket, amaranth, zucchini noodles, hijiki seaweed, slices of artichoke hearts and avocado, cucumber, red pepper, wild garlic aioli, mango dressing, marinated asparagus and lime dressing. You already know it was amazing. The mango dressing was what really made the salad come to life and since being back I have made it and mixed with cubes of avocado, red onion and coriander. To make: blend 1/4 inch fresh ginger, 2 mangos, 1 small or half a large lime, 1 tbsp apple cider vinegar and a pinch of salt. Pour over entire life.

It will be another year before I get my little holiday to UK without the baby. I’m sure there will be lots of new places to try by then but so far I’ve got The Mae Deli, Good Life Eatery and Rawligion. Watch this space 🙂

Hi! I'm Emma, health coach, personal trainer, foodie, chef and globe trotter in training :-) Living in Hong Kong with my husband and baby boy. Join me on my journey to ultimate health and wellbeing.